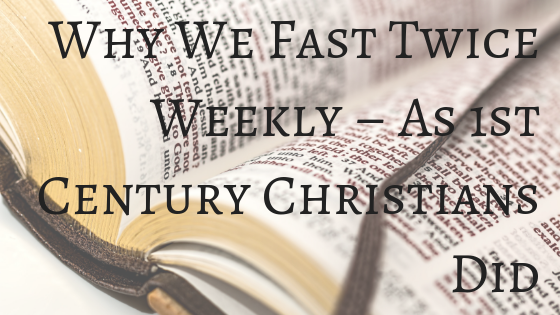 The Didache, a book written by 1st century Christians with the clarity of hearing Christ’s teachings firsthand orders us in Chapter 8: “fast on the fourth day (Wednesday) and the Preparation (Friday).”

When you fast, do not look somber as the hypocrites do, for they disfigure their faces to show others they are fasting. Truly I tell you, they have received their reward in full. 17 But when you fast, put oil on your head and wash your face, 18 so that it will not be obvious to others that you are fasting, but only to your Father, who is unseen; and your Father, who sees what is done in secret, will reward you.

… the lesson is clear – the question is not if we fast but when we fast. Consider this guidance as to the frequency of fasting:

Consider in Matthew 23:2-3 Christ commanded us to do what the scribes and Pharisees tell us.

The hearts of the clergy in Christ’s day were hard as rocks. Do you think they were doing anything extra out of generosity? Clearly doubtful.

If however you think the clergyman was being generous, then why did the Pharisee only state he was tithing rather than doing more? Tithing is the minimum obligation and the Pharisee exhibited nothing more than the minimum that was required of him. If the Pharisee had a generous heart he would have donated 15% or 20% of his income - not the absolute minimum tithe as he stated.  It would have been inconsistent for the Pharisee to brag of doing only the minimum with money but extra with his fasting.

Then John’s disciples came and asked him, “How is it that we fast like the Pharisees, but your disciples do not fast?”

15 Jesus answered, “How can the guests of the bridegroom mourn while he is with them?  The time will come when the bridegroom will be taken from them; then they will fast.

Notice in the above verse Christ did not argue that John’s disciples fasted too often – nor did he say that the cadence of the Pharisees fasting twice weekly was too frequent. If anything, Christ’s response which did not challenge the fasting pattern of twice weekly was an endorsement of it.  This is again consistent with the findings that all believers are obligated to fast, not just clergy, twice weekly.

Wednesday and Friday fasts were the understanding 1st century Christians lived by. In addition to the Didache this teaching is emphasized in Medjugorje. Like other teachings from Medjugorje, the detail on this topic is eye-opening and supports scriptures completely. It specifies no one is exempt from weekly fasting as we have allowed ourselves to be deceived into thinking. It also defines the vulnerability of the Christian who does not fast regularly.  In The Visions of the Children Ivan Dragicevič was asked by the author to explain Heaven's message concerning the state of the faithful who pray but make excuses for themselves and don’t fast regularly. Dragicevič replied –

A Christian who does not fast, is like a one legged soldier in battle. He is an easy target for the enemy to pick off.

Could Dragicevič be right? Could the explanation for the state of the world be largely explained by how this commandment has been extracted from churches today?

Another notable Christian, John Wesley, founder of the Methodist church also concluded that Christians are specifically obligated to fast on Wednesdays and Fridays. Perhaps ironically Wesley was so aligned with the teachings of Medjugorje, that he would not ordain a minister unless the minister committed to fasting on Wednesdays and Fridays. What was he looking at that would lead him to such a specific conclusion … and was it coincidence that it dovetailed with the conclusions of Medjugorje, the Didache, and the Pharisees/disciples twice weekly fast referenced above?

Consider the explicit teachings of the Greek Orthodox Church below and the reasoning why these two days were specifically observed by early Christians:

"One must fast during Holy Week and Wednesday and Friday."[18] But why should I say that this regulation is only of the Apostles? It is a regulation of Christ Himself, for this is what the Apostles say in Book V, Ch. 14 of the Constitutions:

"He (that is, Christ) commanded us to fast on Wednesday and Friday."[19] We therefore fast on these days according to the Holy Hieromartyr Peter (Canon 15):

Consider the Greek church found it so critical that all believers fast that early writings specified that a physician must verify a believer was ill enough to warrant release from the fasting obligation of believers. Per below the Greek text continues giving women exemption during pregnancy, again underscoring how critical it is for all others to fast weekly:

Therefore, because the fast of Great Lent is equal to the fast of Wednesday and Friday it follows that, for those who are sick or weak, the relaxation of the fast is also [acceptable]. For this reason, as Canons 8 and 10 of Timothy allow a woman who is pregnant during the Great Fast to consume as much wine and food as is necessary for her condition, this also applies to the fast of Wednesday and Friday. The same holds for those who have become weak from excessive sickness...

So says the divine Jerome:

"The fast of Wednesday and Friday is not to be broken unless there is great necessity."

The divine Augustine says the same.[20]

Many Christians today say that it is not necessary to fast regularly ... yet Christ clearly specified believers will fast, acknowledged rather than discouraged the intense fasting pattern of John's colleagues who fasted like the Pharisees and we see the Apostles fasting after the Ascension. So please ask yourself:  What is the case you can build that suggests anything other than twice weekly is the right frequency for believers - and if you choose to take this stance how frequently will you fast? What support can you give for the cadence of your fasting?

In conclusion let us address the topic more broadly regarding why fasting is critical for our nation, church, families and endeavors. Consider the much quoted verse of  2 Chronicles 7:14 –

If my people, which are called by my name, shall humble themselves, and pray, and seek my face, and turn from their wicked ways; then will I hear from heaven, and will forgive their sin, and will heal their land.

This verse is indeed hope for a nation!  As Derek Prince summarized, this is a 7 step process  – 4 steps believers must first take, followed by the 3 steps God will take after believers have taken the 4th step.

What specifically does it mean to humble oneself? In scripture humbling oneself was synonymous with fasting.

In Ps 35:13 – David specifically says “I humbled my soul with fasting”. Believers need to realize the prescription of national restoration begins with fasting as the first requirement to obtain a renewal of the land.

Here are links to more content on fasting:
The Power Of Fasting

Fasting ... Trigger To The End of WWII?